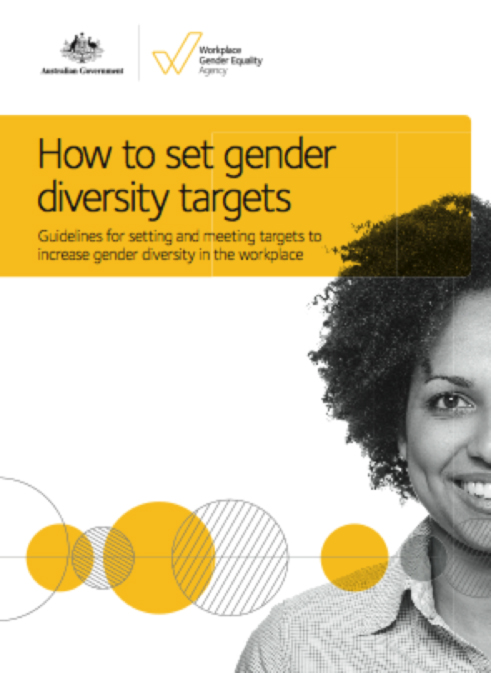 The Workplace Gender Equity Agency’s Toolkit was released earlier this week,  If you flick through the document itself at the link below (you can get an idea of what is being proposed in under five minutes) you will see some practical suggestions for designing and implementing gender targets in both large and small organisations.

The attached suggestions with realistic implementation time horizons are a good way to get some engagement. However, it will need people (like us) to promote the concept and its importance so the whole gender reporting issue isn’t viewed as just more government bureaucracy.

The toolkit includes a target-setting calculator that enables employers to input their own data, such as turnover and recruitment rates, to determine realistic gender representation targets over a period of time.

Head of the WGEA Ms Helen Conway noted that calls for quotas are growing louder from those impatient with the lack of progress of women into leadership and management positions. However, Ms Conway said regulation of this nature often leads to a “tick-a-box” mentality which does not promote the necessary cultural and structural change to ensure sustainable improvement. She said targets are a better solution.

“Targets based on rigorous baseline data and analyses are a powerful lever for change that can be applied at any level of an organisation and allow employers to set realistic goals, taking into account their particular circumstances.

Recent changes to the regulatory environment are helping to focus the attention of employers on gender diversity.

From next year, under the new Workplace Gender Equality Act 2012, non-public sector organisations with 100 or more staff need to report to the WGEA on a range of gender equality indicators, including the gender composition of their workforce.

In addition, the ASX Corporate Governance Council’s Diversity Recommendations require listed companies to report annually, on an “if not, why not” basis on the following matters: the establishment of a diversity policy; the establishment and annual assessment of measurable gender diversity objectives and progress towards achieving these; the proportion of women employees in the organisation, in senior executive positions and on the board.

The Workplace Gender Equality Agency is an Australian Government statutory agency charged with promoting and improving gender equality in Australian workplaces. The Agency is responsible for administering the Workplace Gender Equality Act 2012. The Agency’s vision is for women and men to be equally represented, valued and rewarded in the workplace. The Agency was formerly known as the Equal Opportunity for Women in the Workplace Agency. More information is available at wgea.gov.au